The Catholic Church in the Faroes

Kirkjubøur, the spiritual and cultural centre of the Faroe Islands until the Protestant Reformation, was the site of several churches, a bishop´s residence and a seminary.

Re-establishment of the Church

In 2006, the Catholic Church celebrates 75 years on the Faroe Islands since the re-establishment of the church in April, 1931.
In 1857, German priest, Georg Bauer and Italian assistant-priest, Luigi Mussa sailed to the Faroe Islands on the ship, “Fortuna” – eight years after the granting of religious freedom in Denmark. Initially, the priests met with much suspicion and opposition, unable even to find lodgings. However, in 1859, a house was purchased from Christian Holm in Rættará, in the capital, Tórshavn, and Fr. Bauer began building a church which was completed in June of the same year. 70 people participated in the first church service which was followed a few days later by the first Confirmation in the church. Fr. Bauer spent the next twelve years in Tórshavn, during which time several Faroese people were received into the Catholic Church.

When Fr. Bauer left the Faroes in 1872, priests continued to visit regularly until 1894, when a final visit was made to the only remaining Catholic on the islands, an elderly lady living in Hvítanes, a small village just outside Tórshavn.

However, this was not to be the end of the Catholic Church on the Faroe Islands. Once again, it would rise like a phoenix from the ashes when Cardinal Van Rossum visited the islands on the way to Iceland in 1929. He was greatly saddened by the fact that the Catholic Church was no longer present. He was also deeply touched by the plight of the people at that time who were living in harsh conditions. On returning to Rome, he spoke to two newly ordained priests, Fr. E.G. Boekenoogen from Holland and Fr. Thomas King from Scotland, and to members of the Franciscan Missionaries of Mary about the possibility of re-establishing the Catholic Church.

In April, 1931, two Franciscan Missionaries of Mary sailed to the Faroe Islands on the ship, “Dr. Alexandrina”, and arrived in Tórshavn in lay dress, fearful of the reception they might receive. One of the sisters was Danish and had been re-called from China, having spent many years living and working amongst the people of that country. The other sister was Dutch. The two priests arrived the following month. More sisters arrived later.

In the beginning, the two priests found lodgings in the town. The sisters also found lodgings after some difficulty. In August, they rented rooms in a house owned by the Klett family in Bringsnagøta, Tórshavn. Very soon, people guessed the identity of the sisters and began approaching them for help in educating and looking after their children. Within the year, they had established the first kindergarten on the Faroe Islands and were responsible for twenty-two children, several of whom are still amongst us today. A decision was taken by the bishop of the Diocese of Copenhagen (Faroe Islands, Denmark and Greenland) and the Franciscan Missionaries of Mary to purchase land outside the town, now known as Mariugøta and Varðagøta, and build a school and church. There was strong public opposition from some quarters, but the church and school were completed and blessed in November, 1933 and January, 1934, respectively, during services attended by about sixty people, including eleven Franciscan Missionaries of Mary.

Construction continued for several years, funded partly by a very popular two day Bazaar which was held each year at Olavsøku – the national festival during which St. Olav, patron saint of the Faroe Islands is remembered – and the hard work of the sisters, leading to the enlargement of the school and the construction of a crèche and kindergarten. For a short time during the sixties, there were no less than twenty-three sisters. A large number of the citizens of Tórshavn passed through the hands of the sisters who became known for the quality of their dedication and their religious tolerance. Several Faroese people found their way into the Catholic Church, thus the small Catholic community began to grow once more.

Times of change for the Sisters

By the 1980´s however, it was evident that the sisters could not continue to run the three institutions. There were a number of reasons: the diminishing number of sisters; the increasing financial burden of running three institutions; and the development of the Faroese childcare and education system which had taken place over fifty years. After negotiation, it was agreed that Tórshavn Town Council would take over the school (including the church) and crèche and build a convent and church for the sisters. The kindergarten remains under the direction of a Franciscan Missionaries of Mary and two other sisters are also members of the staff. The sisters moved into the new convent, “Kerit” (1 Kings 17: 2-6) in April, 1980. The new parish church, Mariukirkjan, was built and blessed during an ecumenical service in August 1987.

Since the sudden the death of the last permanent parish priest, Per Waagø, in 1990, the parish has been administered by Paul Marx, OMI., August Ziggelaar, SJ., and Lars Messerschmidt. Several priests serve the parish on a rota basis. Christian Gabrielsen, ordained deacon, holds prayer services.

Today, there are five FMM on the Faroe Islands from four different countries: Belgium, Ireland, Korea and Malta. There are approximately 270 Catholics* throughout the islands, at least a third of whom are Faroese. A few young parishioners trace their roots back five generations; others trace their roots back to their grandparents. Faroese people are received into the Catholic Church at regular intervals. Two Fareose parishioner represented the Catholic Church and the Faroe Islands during the visit of Pope John Paul II to Denmark in 1989. Both were attired in national dress and had the privilege of receiving Holy Communion from Pope John Paul. The other parishioners come from 23 different nations: Denmark, and various countries of Eastern Europe, Asia, Africa, North and South America and Oceania. 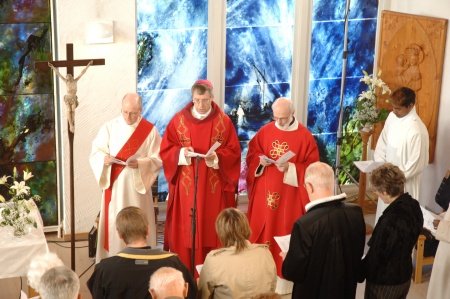 On Sunday, 25th. June 2006, the parish community celebrated the 75th. anniversary of the re-establishment of the Catholic Church on the Faroe Islands in 1931 and the founding of the present Catholic community. Bishop Kozon and parish priest, Fr. Lars Messerschmidt, made a special weekend visit to the Faroes. Bishop Kozon was the main celebrant.

The singing was accompanied by parishioners, Ole Jacob Nielsen (flute) and Maria Magnussen (violin) and several other musicians. The Mass was televised and transmitted on Faroese Television in the afternoon. About 100 people – parishioners, neighbours, friends, and tourists – participated at the Mass. The Lutheran bishop was a special guest. One of the tourists turned out to be a former President of Ecuador (1992-97)! Mass was followed by a special “canopy” reception in the parish hall. Several speeches were made as people relaxed and mixed with each other.
* Updated in nov. 2019