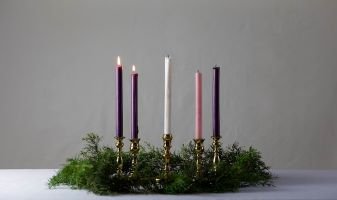 A few days ago I had to travel to Suðuroy. Pastor Hanus Pál Jógvansson called me in November to ask me to come and do a service of blessing the men working on the new tunnel which will link Óravík and Fámjin; they also wanted me to go with them to the portal of the tunnel, in order to place a statue of Saint Barbara there. So I blessed the men, their machinery, the work they are doing, and the statue; then we all went in torrential rain up a very muddy road to the tunnel. I think I was wetter that day than I had ever been before. But I was very happy to be there. The men were from Slovakia, a mostly Catholic country; they did not look like people who go to church every Sunday, but they certainly seemed very happy to have the protection of the patron saint of people who work underground and people who work with explosives. I went the day before that ceremony, so I was able to celebrate Mass in Hvalba with a small group of Catholics from Indonesia, the Philippines and Poland, as well as some Lutherans who had never previously attended a Catholic Mass.

Building tunnels is hard physical work, and, in the Faroes, it requires clever engineers and is very expensive. The roads, bridges and tunnels here are impressive, and they have really changed people’s lives, by allowing them to travel much more easily through a challenging landscape. Sometimes it is not easy to understand the Scriptures, but people who live here should find it easy to understand what today’s Gospel says about John the Baptist. He was preaching in the wilderness of Judaea, and he was the one Isaiah was talking about when he had said, “A voice cries in the wilderness: Prepare a way for the Lord, make his paths straight.” The first reading at Mass next Tuesday is the full quotation from Isaiah, which you probably recognise, where the prophet tells the people of Jerusalem to make a straight highway across the desert, to fill in the valleys and lay low every mountain and hill. Isaiah was asking them to change the landscape, and that is what John the Baptist does in today’s Gospel. But John is talking about the landscape within us. He tells us there needs to be an important change in the way we live our life. We need to change, and we probably need to change a lot.

At the end of today’s Gospel, John the Baptist says three important things about Jesus. First of all, he tells us Jesus is more powerful than he is; in fact, he feels he is not even worthy to carry Jesus’ sandals. Secondly, when Jesus baptises people, it will not be only with water: “He will baptise you with the Holy Spirit and fire”. The third thing is about what we call the Last Judgement. This is where we may need to change the way we behave.

John the Baptist says that our meeting with Jesus will be a time when Jesus will separate what is worth keeping from what needs to be thrown away. It is like the time when a farmer has harvested the wheat from his fields; he puts the wheat in his barn, to use it later. That is like Jesus inviting good souls to be with God the Father for ever. But the farmer puts what is left over – the rubbish, or “chaff” – into “a fire that will never go out”. We know that Jesus talks about eternal happiness for people who have lived good lives and eternal punishment for people who have led wicked lives. What we have heard in today’s Gospel is a warning. The first part of Advent is a time when we are supposed to look forward to meeting Jesus at the end of our life. Today John the Baptist warns us that we really need to be ready. He reminds us of that vision of the prophet Isaiah when the people of Jerusalem were challenged with the task of building straight roads in the mountains of Judah; in fact, the whole landscape has to be changed so that they can welcome God when He comes. John is asking us to think hard about those things in each of us which need to be flattened or made straight, so that we will be ready when we meet the Lord.

We all have our own obstacles, our own bad habits or sinful behaviour. They could be things which annoy or damage other people, or they could be hidden failings which only we know about. John the Baptist is asking you and me to be very honest about anything in our life which is bad, and he reminds us about Isaiah’s vision of the changes the people of Judea had to make in their landscape because he thinks you and I have some changes to make within us. It is not hard physical work, like building a tunnel, but it is hard spiritual work. Now is the time for us to start changing.