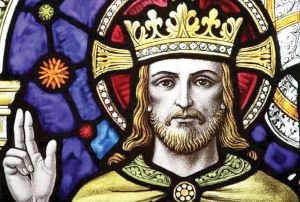 Solemnity of Christ the King, 20 November.

Every 25 years, the Catholic Church celebrates a Holy Year. There are sometimes also special Holy Years, but the next ordinary Holy Year is in 2025. At the end of the Holy Year in 1925, Pope Pius XI added to the Church’s Calendar The Feast of Our Lord Jesus Christ the King. In 1969, Pope Paul VI renamed it The Solemnity of Our Lord Jesus Christ, King of the Universe. Pope Pius was horrified that “the majority of men had thrust Jesus Christ and His holy law out of their lives; that these had no place either in private affairs or in politics”. He thought that, “as long as individuals and states refused to submit to the rule of our Saviour, there would be no really hopeful prospect of a lasting peace among nations”. He found hope in the fact that many were returning to the practice of the Christian religion. But, at the same time, believers were being persecuted in various parts of the world, in the Soviet Union and in Mexico, where a particularly vicious anti-Catholic constitution had been adopted in 1917.

Pope Pius did not want Christians to overpower the government in any country. He believed that the new feast would encourage rulers to accept “that they rule, not by their own right, but by the mandate and in the place of the Divine King”. He was convinced that rulers who recognised the authority of Christ the King would “exercise their authority piously and wisely, and… make laws and administer them, having in view the common good and also the human dignity of their subjects”. He thought that people everywhere would “see in their king or in their rulers men like themselves, perhaps unworthy or open to criticism”, but that, when earthly rulers reflected the authority of Christ God and Man, there would be peace and harmony. He also hoped that, if everybody recognised Christ as their King, many conflicts might be prevented, or their bitterness might be diminished. He hoped that a feast celebrating Christ as our King every year would help people all over the world to develop a sense of every person’s dignity.

Was Pope Pius being too optimistic. In a human sense, that could be true, but I am grateful that we are reminded every year that above every earthly ruler is a heavenly one, Our Lord Jesus Christ. We do not have a Faroese translation of the special preface for today’s Mass, but this is how it describes the Kingdom of Our Lord Jesus Christ: it is “an eternal and universal kingdom, a kingdom of truth and life, a kingdom of holiness and grace, a kingdom of justice, love and peace”. It is different from other kingdoms, which tend to measure their success in terms of wealth and military strength.

Around the world, today is Youth Sunday, the day when the Church gives thanks to God for all her young members. This is a good time to mention World Youth Day. It is a gathering of young Catholics, which takes place every two years. Next year, it will be in Lisbon at the end of July and the beginning of August. Father Sigurd, who was here last month, will be part of the team from the Diocese of Copenhagen. There will be groups from most of the world’s dioceses. First, they spend some days meeting local Catholics in a diocese in Portugal or Spain, and for the last few days they gather in Lisbon. The young people receive catechetical instructions from bishops, and for the last few days they will meet the Pope for a liturgy of penance and confession, a time of adoration of the Blessed Sacrament, and a huge celebration of Mass. To me, it is very important to try to make sure that some of the young people present next year are from the Faroe Islands. It is a unique opportunity to meet hundreds of thousands of other young Catholics, which could really strengthen their faith and give them the confidence to be active in the Church when they come home. It is important to know that the World Youth Day is not for children, but for young adults, from 18 to 35 years old. We may have a small group of people who are prepared to go, but an important question is how to pay for their journey and the cost of taking part. The Danish Catholic youth organisation DUK – Danmarks Unge Katolikker – have told me they will help, but it will still cost a lot, so I hope we can all support them. The organisers need their names before Christmas, so please think about people you know who could benefit from an experience which has already affected thousands of young people profoundly and positively. If you know anyone who could go, please give me their names, together with some way of contacting them. We need young people with strong faith, who are proud to have Christ as their king, for our parish to flourish in the future.