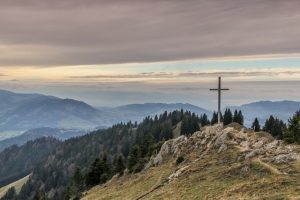 The first Message for Lent came from Pope John XXIII in 1963; Pope Paul VI wrote one in 1973, and there has been a Lenten Message every year since then. This year, Pope Francis’ Message for Lent is a reflection on something Saint Paul wrote in chapter 6 of his Letter to the Galatians: “Let us not grow tired of doing good, for in due time we shall reap our harvest, if we do not give up. So then, while we have the opportunity, let us do good to all” (6,9-10).

The season of Lent is like a spiritual retreat, if we use it well. It helps us to prepare for the most important celebration of the Christian year, what is called “the paschal mystery of the death and resurrection of Jesus Christ”. Like any spiritual retreat, it involves discipline. We are asked to do three things which we do all year long, but we put special emphasis on them at this time: prayer, fasting and almsgiving.

In most Western countries, it is odd that everyone knows so much about the Muslim holy month of Ramadan, but hardly anyone knows anything about Lent. In the Faroe Islands, things are different, because very few Muslims live here, and there seems still to be great respect for the traditional religion, Christianity. Perhaps we should thank God for that. One year, I went to our parish school on Ash Wednesday to celebrate the beginning of Lent, and asked the children, “Are there any Muslims here?” The teachers looked worried; they probably wondered what was coming next! Four children put up their hands, and I said, “Can I ask you some questions about the holy month of Ramadan?” They agreed, so I asked them if people pray or go to the mosque more often during Ramadan, if Muslims fast at that time, and if it is a traditional time for people to give money to the poor. Everyone knows about Muslims fasting from dawn to dusk during Ramadan, but these Muslim children agreed that prayer and giving alms are part of Ramadan, too. I then turned to all the children again, and suggested that the Prophet Muhammad (who lived 600 years after Jesus) probably ‘borrowed’ the idea of Lent, but made it slightly different. In some ways, we Christians are closer to our Muslim brothers and sisters than people think, but often – I have to admit – Muslims seem much more strict about Ramadan than we are about Lent.

When I was growing up, the only thing we knew about Lent was that we should give up something we like; so children gave up sweets, and adults gave up drinking alcohol, or used Lent as a time to lose weight. That took care of fasting, but praying more and thinking about the poor were never mentioned. Later, Caritas asked us to eat less on one Friday in Lent and to send them the money we saved, which they would use for people in need. That introduced the idea of charity, and we began to see Lent differently.

This year, Pope Francis asks us to use the discipline of Lent to sow a seed in our hearts. He hopes our praying, fasting and almsgiving will help us see life differently. He suggests we can “sow seeds of goodness”. Then, we can look forward to a harvest, but what kind of harvest is the Pope thinking about? The “first fruit of the goodness we sow appears in ourselves and our daily lives, even in our little acts of kindness”.

The Pope knows human nature very well, so he asks us not to grow tired of praying, not to grow tired of uprooting sin from our lives – because “serving God in freedom from sin brings forth fruits of sanctification for the salvation of all” (see Romans 6,22) – and not to grow tired of doing good in active charity towards our neighbours. “We need to pray because we need God”: relying on ourselves will never be enough. Perhaps our sense of helplessness when we look at the news about Ukraine should help us to see that we really need to turn to God. Fasting is meant to help us see how weak we can be, but that weakness can “lure men and women into sin”. How weak are you? Are you addicted to anything? Pope Francis mentions addiction to digital media. Are you really in control of how much time you spend in front of a computer screen? Lent could be a time to limit this and to spend more time meeting people face-to-face. To give alms or to look after others can be “to seek out – and not to avoid – those in need; to reach out – and not to ignore – those who need a sympathetic ear and a good word; to visit – and not to abandon – those who are lonely”. It is good to remember that “the soil is prepared by fasting, watered by prayer and enriched by charity”. The important thing is that we are sustained by God’s grace in the sacrament of reconciliation (confession) and in the knowledge that we are not alone in our efforts. Christians everywhere are doing their best to use this time well!

← What can you see from a Sycamore tree? Services during Holy Week and Easter Week →
Share This